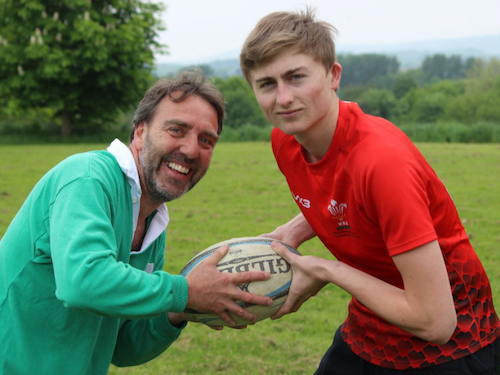 If you missed the BBC Spotlight interview with our rugby star William, you can watch it here.

Academy student William has recently returned from Sydney, Australia, after being selected to play for the Welsh team in the biggest Deaf Rugby 7’s tournament the world has seen – and winning!

This was the first major international Deaf rugby tournament for more than fifteen years, and included both men’s and women’s teams from Australia, England, Fiji, Ghana, Japan and Wales. Wales reached the final having defeated Fiji in the semi-final 26-21, and went on to defeat England 21-15, and take the trophy.

Before the tournament, 19 year old William said: ‘I hope we win because it’ll give the deaf community something to be proud of.’

William is from Wales, and is a residential student at Exeter Deaf Academy studying Outdoor Adventure with Exeter College as a day student. He uses BSL (British Sign Language) as his first language, and is an avid sports fan. He has been playing rugby since he was young, both with hearing and deaf teams at home in Wales and in Exeter.

William said: ‘I’ve wanted to play for Wales since I was small, so when I found out I had been picked for the team back in December, I was nervous. We arrived in Australia and it was so hot! We played our first match and won, and then our second, and I was really proud of myself and the team.’

‘Rugby is important to me because it doesn’t matter that I’m deaf – I can play as an equal. The Deaf Academy has really supported my rugby. My Exeter Deaf Academy teacher has coached me, and now I coach other students here at the Academy, and help to show that they can win and achieve things. Now that I’ve come back from Australia and we’ve won, everyone at the Deaf Academy is really proud of me!’

He also took advantage of the trip to do some sightseeing, and climbed the Sydney Harbour Bridge, saying: ‘That was one for the bucket list! The views were beautiful.’

On his return William was interviewed by BBC Spotlight presenter Johnny Rutherford, and featured on BBC news! Watch the report here.