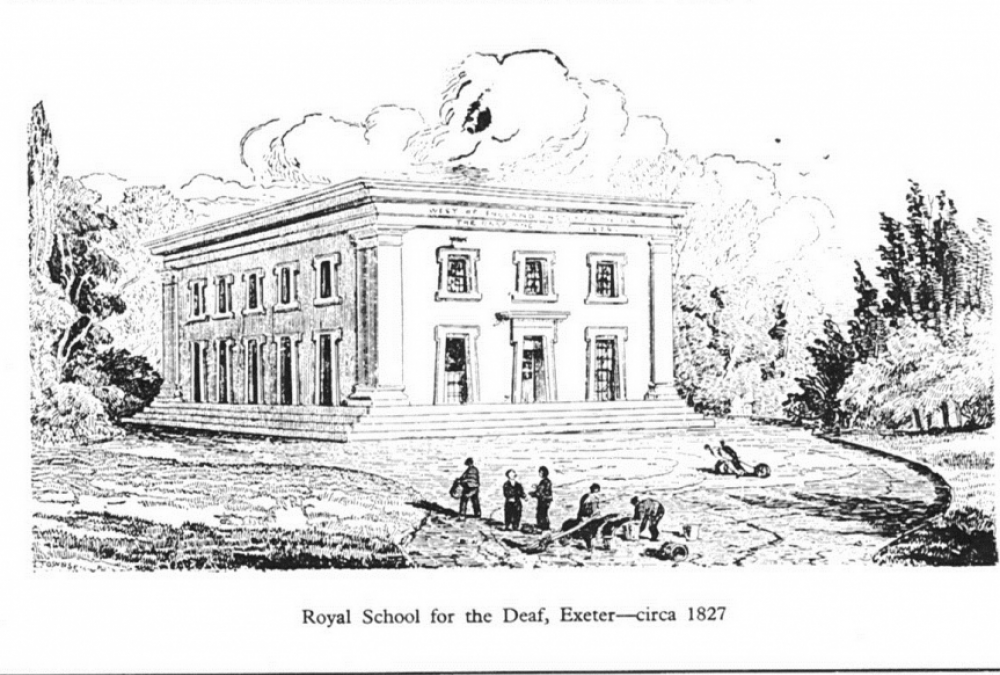 190 years ago, our charity founder, Mrs Hippisley Tuckfield wrote to the Gentleman of the County (Devon) persuading them that there was a great need for an education provision for deaf children in the region.

“This school could happily become the foundation of a great and lasting benefit to a most interesting class of children”.

Mrs Tuckfield’s determination paid off at a historical meeting at the Royal Clarence Hotel in Exeter on 6 April 1826, where it was agreed ‘an Institution be established in Exeter’.

Amazingly both the hotel and our school still exist as well-known landmarks in Exeter today, we are now known as Exeter Royal Academy for Deaf Education and have indeed become ‘a foundation of a great and lasting benefit to a most interesting class of children’.

Ourselves and Topsham Road are synonymous, not surprising since premises for deaf education have stood on this site since 1828.

The Topsham Road site, originally purchased from William Hooper, the creator of the suburb of St. Leonards, was chosen as it was in ‘good distance’ of Exeter and sat just within the toll gate.

We initially started with just 6 pupils from both Devon and Cornwall, but this number soon rose and in 1829, three years after conception, we had 50 pupils on the role. Travelling such distances by horse and cart, meant we have always been residential. The railway did not make it to Exeter until 1844, so pupils would normally stay at school for six months returning home for Christmas and summer. Easter holidays were only introduced in 1934, over one hundred years since we started, and half term holidays in February 1966.

Today students get to return home to their family much more often, with school age residential students staying a maximum of four nights a week and college age students three weeks. Many students also attend as day pupils.

We have survived two world wars and a number of health outbreaks in the city including typhoid and, in 1832, cholera. Students and staff luckily survived the first cholera wave, but sadly not the second which produced 40 cases with three fatal.

During the First World War the school staff became entirely female, with one exception, as many men went to fight. Staff at the time decided to continue the men’s pay and reinstate them when they returned, though sadly three never did.

Prior to the war we had purchased Mount Radford Lawn, which is still opposite today, however the students had to wait some years to reap its benefits as when complete the wartime measures were affecting food supplies and so the new playing field was promptly dug up for potatoes. During World War Two the swimming pool also did its part for National Service, becoming a static water tank, only returning to normal use in the 1950s.

As far back as the 1800s, Deaf students have been integrated in the local community. From 1892, girls studied cookery alongside students at Exeter School on ‘Link’ courses – with many of today’s students studying at nearby Exeter and Bicton colleges.

Girls and boys have also attended Scout and Guide groups including Andrew Ford who in 1955 became the school’s first Queen Scout with 8th Exeter Boy Scouts and attended the St. George’s Day parade at Windsor Castle. A number of residential students are today members of 1st Topsham Sea Scouts.

We are a registered charity and are not funded in the same way as state schools so rely on fundraising. A clear pattern throughout our 190 year long history is the generosity of the people of Exeter and the region.

The original charity donation to start the school was £883.15 shillings, in 1908 Mrs. Nosworthy of Dawlish donated most of the money for a new gymnasium and swimming bath and £14,000 was raised in the local community in the 1960s for a playground, to name just a few showings of generosity.

This kind of ongoing support from the local community continues to make a critical difference to Deaf students like 12 year old Jordan. Jordan’s mum said:
“At just 11 years old Jordan he had been to 7 different schools. The schools were unable to support his level of needs and it became clear that he was being contained, rather than educated. He ended up being taught in isolation and was left unable to communicate or socialise, he had no school friends. We had almost given up hope for Jordan. The Deaf Academy has changed his life. He is confident; he’s signing, reading, behaving well and is much calmer. Socially and emotionally, Jordan has had the opportunity to flourish and become part of a community.
Jordan recently celebrated his 12th birthday at the Academy and received his first ever birthday card from a friend. Words cannot describe the happiness we felt for him when we found this out.”

It’s true to say, thanks to the help of many, our school has been ever changing as Karen Burgess who started in 1996 and is now Head of Care said,

“I first came to the Academy for voluntary work to get some experience and 20 years later I’m still here. Over the years things have changed, well everything but the building that is. What has remained consistently the same is the staff’s dedication to supporting students to the best of their abilities.”

“I’ve seen students arrive at a very young age with limited independence and communication skills who ‘blossom’ into independent adults. I feel proud, old, but proud to see previous students who either visit or return to work with us supporting the next generation. Not so long ago I had a previous student who is now working in a similar capacity to me say: ‘How did you put up with me?’ My reply….. ‘it didn’t feel like I was putting up with you”

Jill Coley, Education Administrator, who joined in 1991, said:
“I can’t quite believe that I have worked at the Academy for nearly 25 years! Whole departments have moved, walls have been knocked down and rebuilt, some things have gone forever (the kiln, dark-room, swimming pool) and others have been created (library, sensory pod, filming room and IT suites). It has been a privilege to watch the youngsters grow up through the school, to college and out into the big wide world (sometimes returning to the Academy as members of staff). There have been students I have known from tiny primary-age children to fully-fledged adults, and it brings a lump to my throat when they finally move on. It is a privilege to be part of the work of this great school.”

Exeter Deaf Academy CEO, Jonathan Farnhill said, “I’m so proud of what the Deaf Academy has achieved over 190 years and the hundreds of Deaf children we have helped and supported. We have survived many things including successive governments, changes in technology and war. Today we are still standing strong as the only residential specialist deaf education provider in the South West. We have many plans for the future and are always re-developing ourselves to continuously meet the needs of our students, something I would like to thank the people of Exeter and Devon for, in regards their support over the years. I see so many students transform as they move through our school and college, as they develop a sense of belonging and find their way in the world. Watching them then go on to achieve so much is the best thing about being part of the Deaf Academy. We have so many more amazing years ahead of us.”

In 2016 we stand as the only specialist day and residential Deaf education provider in the South West with a proud history in the city of supporting students who travel from all over the UK to attend. The charity specialises in tailored education and care for Deaf young people aged 4-24 by running a school and college in a bilingual English and British Sign Language (BSL) environment. The bilingual community creates a sense of belonging for Deaf students as they develop their language skills, independence and fulfil their own potential.