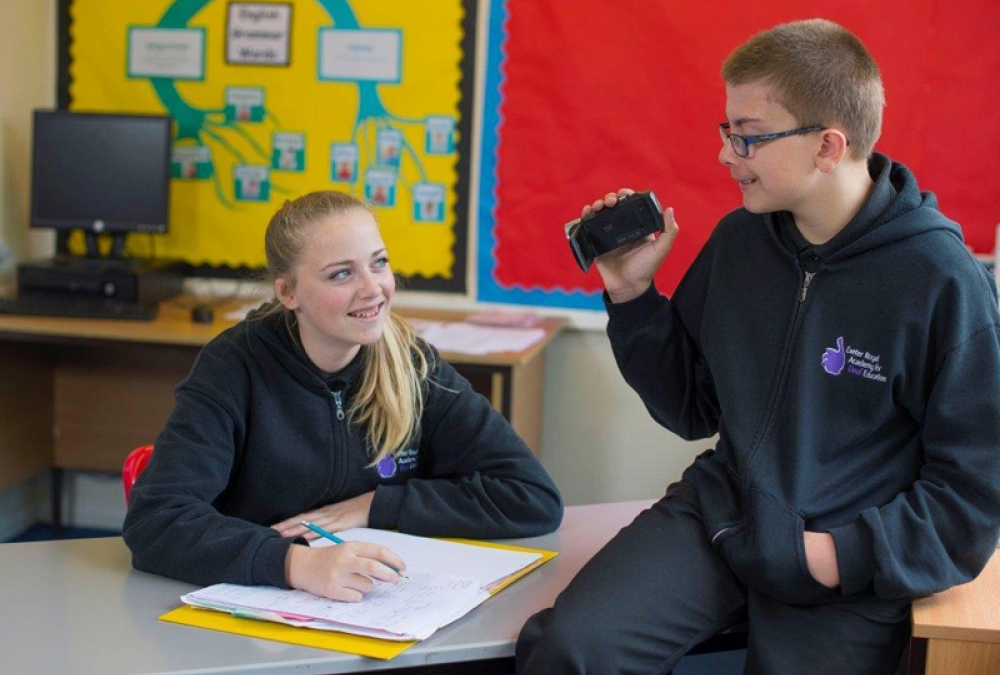 Students will share what they imagine might happen at the Royal Albert Memorial Museum & Art Gallery (RAMM) at night in the launch of their “Writing With Our Hands” film on Wednesday 19th October. The showing is part of Exeter’s exetreme imagination festival of writing and stories.

Inspired by objects from the RAMM collection, our students have produced a book of poetry entitled “Writing With Our Hands”. Working with RAMM and Stories Connect, the students transformed their anthology into a short story, “Night at the Museum”, which is included in the “Writing With Our Hands” film being shown in the RAMM courtyard throughout Exeter’s exetreme imagination festival. The objects included an Anderson shelter, an actress’ dress and a starfish.

The film is signed in British Sign Language (BSL) and subtitled which aims to encourage Deaf children and their families to visit and enjoy what RAMM and other museums have on offer. The film also features students explaining their object choices and discusses why Deaf children need BSL.

Exeter Deaf Academy CEO, Jonathan Farnhill, said, “It is always fantastic to collaborate with another prominent local organisation such as the Royal Albert Memorial Museum. Our students always relish the opportunity to show off their creativity and what better way to showcase their talent than through exetreme imagination, the Exeter city wide festival of writing and stories. I hope that all who come to watch the film are as impressed with the students as I am.”

This is not the first collaboration between ourselves and RAMM as we have previously produced the film “My Favourite Things” as part of a Kids in Museums initiative.

RAMM Learning and Skills Officer, Kate Osbourne, said, “It is always a delight to work with the students from Exeter Deaf Academy. Having already completed a successful film venture together I knew the students would take the new brief in their stride. The outcome is superb and I would encourage everyone to come see it during the exetreme imagination festival”.

Cllr Rosie Denham, Lead Councillor for Economy and Culture, said “It is fantastic to see Exeter Deaf Academy and RAMM collaborating on such a great project. Having watched the film I think the Deaf Academy students have produced a really clever and interesting story which highlights some of the fascinating objects found in RAMM’s collection. It’s definitely worth a watch.”

Watch “Writing With Our Hands” for free in the RAMM indoor courtyard from Tuesday 18th October to Sunday 30th October between 10am and 5pm. The film will also be available on Exeter Deaf Academy’s YouTube channel.

exetreme imagination also includes other BSL events: a BSL interpreted performance of The Boy Who Climbed Into the Moon with Theatre Alibi, followed by an opportunity to meet the author David Almond, and Tiger!Tiger!, a BSL storytelling workshop at RAMM. More information about the exetreme imagination festival can be found at www.exetreme.org.