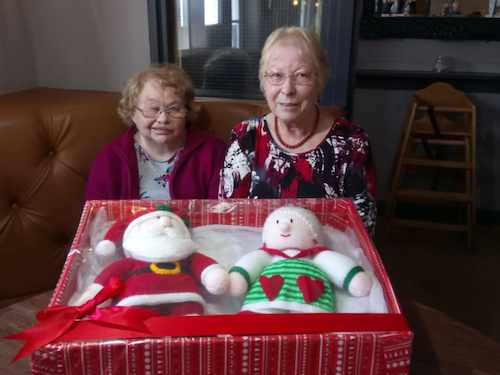 Carol Tucker, a former student here at the Deaf Academy, and Jan Huntley raised £115 for our ‘Do One Thing’ campaign to raise the £250,000 needed to finish kitting out the new facility, due to open in April.

Every year Jan and Carol complete various knitting projects and, after reading about the fundraising appeal in the Journal, decided this year’s festive raffle would be in aid of the academy.

Jan said: “When I read about the Journal and the academy’s campaign to encourage local people to ‘do one thing’ to support them, I really wanted to get involved.”

Carol attended the academy in Exeter in the mid 1950s.

Starting as a boarder when she was just three years old, her mother used to catch a coach from Kingsbridge to Exeter on a Friday to bring her home for the weekend to visit.

All five members of the family used to then travel together on their motorbike and sidecar to return Carol to the academy on a Sunday afternoon.

Jan said: “Carol was born deaf and had a range of other needs, which were challenging to support back in the 1950s.

“I am so please that places like the Deaf Academy now offer support to children and young people who are deaf and may also have complex needs, offering them tailored care and education and support them to thrive.”

Carol and Jan’s fundraising efforts were supported by Franklins Café and Bar, where people were able to view their handiwork and buy a raffle ticket.

Sarah Shaw, fundraising manager at the Deaf Academy, said: “I would like to thank Jan and Carol for their amazing support.

“It is lovely to hear about them wanting to get involved in our ‘do one thing’ campaign, and their very personal connection with the academy makes it extra special.

“With only a few months to go until our move to Exmouth we’re on our last fundraising push to make sure we have all of the equipment needed.”