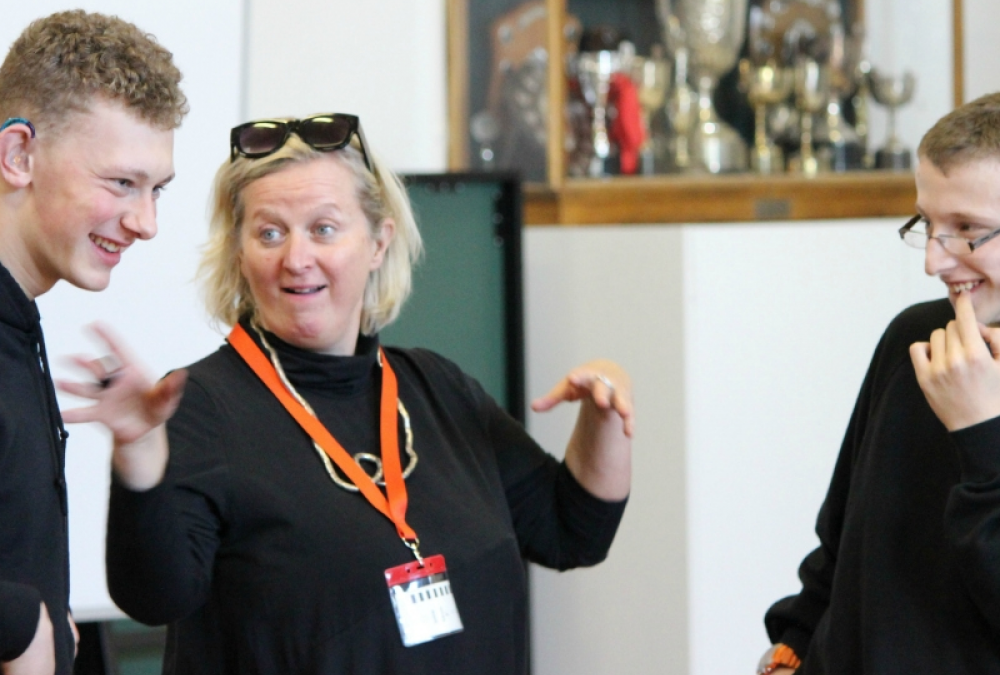 Jenny Sealey MBE is the CEO of Graeae, the UK’s foremost disabled-led theatre. She visited us in March to lead a day of drama workshops for our School and College students.

Jenny, who co-directed the Paralympics 2012 Opening Ceremony, taught our Key Stage 3 and Key Stage 4 techniques in performing characters and taught our GSCE Expressive Arts Class skills in stage directions, before spending time chatting to students in the College common room.

Jenny, who became Deaf (with speech) when she was seven years old, recently presented at TedX Exeter about how Deaf people should aspire to realise their creative potential. Her mother said she should do whatever she wanted, while her careers officer said that she should become a librarian.

In 1997, Jenny joined Graeae as the Artistic Director. In 2009, she was awarded an MBE in the Queen’s Honours, and in 2012 Jenny co-directed the London 2012 Paralympic Opening Ceremony alongside Bradley Hemmings (GDIF).

“I have been so inspired by the Deaf Academy’s energy today. The students are cheeky, fun and have a lot of creative talent. When they focus, they are really connecting with their performance and bringing a lot of imagination to their improvisations. I have been giving them space and time to explore ideas, which is important for drama”.

During Jenny’s drama workshops students developed characters using British Sign Language (BSL) ‘sign names’ and explored different situations such as being lost on an island,. They impressed Jenny with their confidence and enthusiasm. She said:

“Being in a class with young people is always inspiring. It reminds you of the importance of learning and of going on a journey with them towards realising their goals.”

Jenny was joined in the workshops by our Expressive Arts teacher Deb Thomas. Deb said:

“It’s been very exciting for us all to have Jenny visit us. She’s a positive role model and has encouraged and inspired our young people today to believe that they can achieve whatever they want to.”

Jenny Sealey MBE also won the Liberty Human Rights Arts Award and was named on the Time Out London and Hospital Club list of the most influential and creative people in the creative industries.
She has directed work, run workshops and given presentations across the world, from Japan and Bangladesh to India and Brazil. Jenny is an honorary Doctor of Drama at the Royal Conservatoire of Scotland and at Middlesex University and is a Fellow of the Central School of Speech and Drama and Rose Bruford College.