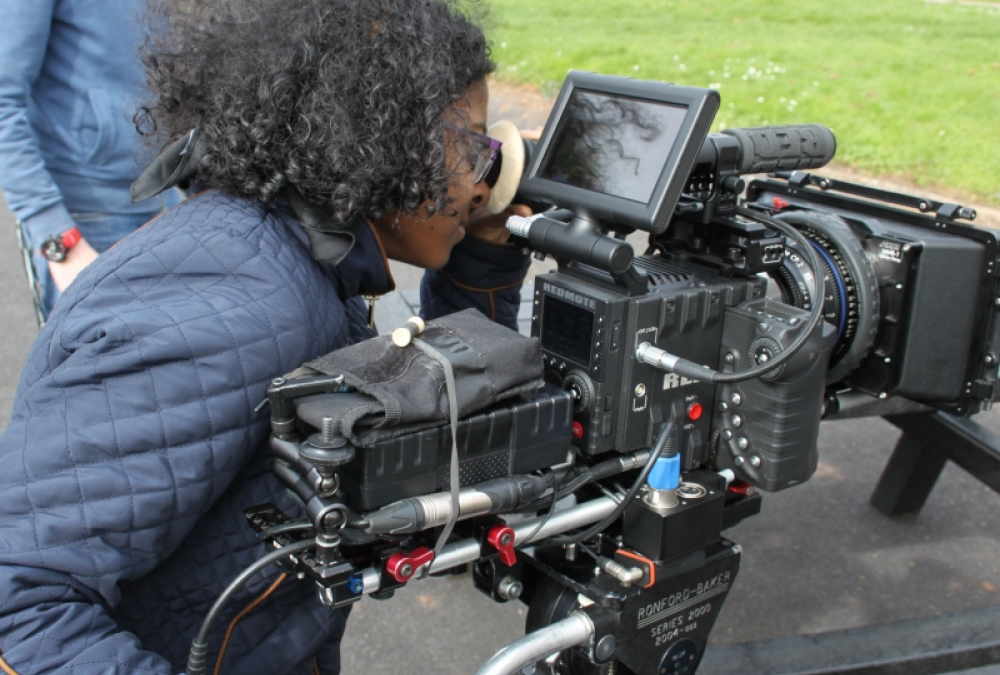 Talented media student Rebekah has enjoyed a first-hand glimpse behind the scenes of a film production company, by playing a key role in making a film for an international audience.

Rebekah and fellow College student William have been in front of the camera signing for an education film that will be viewed by thousands of young people across Spain.

The film is being made for Spanish sixth formers learning about languages used in Britain. Rebekah taught some British Sign Language (BSL) to the presenter Nick Howden-Steenstra in scenes shot by Sharp Focus Productions.

There was also a starring role for Rebekah’s GFE Tutor Tobin Broadbent, who was interviewed on camera about BSL and how it is used.

Rebekah was supported by her Communication Support Worker (CSW), Emily Dare, during the shoot. Rebekkah said:

“It’s been really exciting to learn what happens behind the scenes. I’ve been finding out about lighting, equipment and the process of filming. It’s great to be part of a professional film.”

Rebekah has previously been interviewed by Channel 4 about the communication barriers that Deaf students need to overcome to access education. Rebekkah added:

“I would like to pursue something in film, such as becoming an editor or possibly a Deaf director. My family are really happy that I’m involved in filming and that I’m making the most of these good opportunities.”

“I was asked a few questions about the features of sign language and how it is used. It was very exciting to be part of a film production and both Rebekah and I are glad she has been given a really good opportunity to work with professionals in her field of study.

She will be able to use her experiences from today, to enhance her skills on her Level 3 Creative Media Production course.”

Rob Maidment, Producer and Director at Sharp Focus Productions, said he was impressed by the Rebekah’s and William’s skills in front of the camera and staff at the Academy. he said:

“We have been making short films for teaching English to Spanish sixth form learners and needed to produce one about non-verbal communication. We chose to work with Exeter Deaf Academy to demonstrate the importance of British Sign Language and this film will be used by schools across Spain”.

“The students have been so professional and are positive role models for young Deaf people in the media”.

The film shoot is yet another achievement for Rebekah, who attends Exeter College three days a week as part of her studies. Her portfolio has included creating a radio programme with hearing students, who made the voiceover for her script.

She has already been making an impact internationally, by soaking up the arts scene on a field trip to New York. Rebekah researched filming during a visit to the Museum of Moving Images (MOBI) as part of the trip organised by Exeter College last year, accompanied by Clare Trigg, Communication Support Worker.

Rebekah said she wants to use her talents in the media world, to support deaf people to improve
their lives.