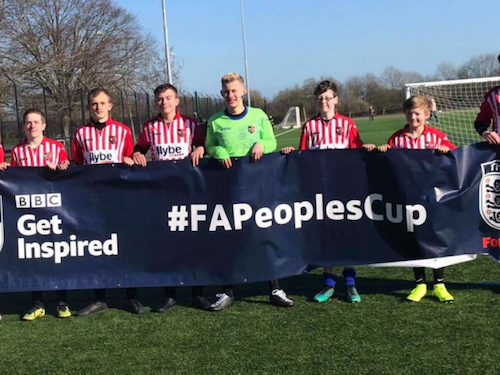 A team of Deaf footballers from Exeter who qualified for the final rounds of the national FA People’s Cup performed superbly against some the best youth disability teams in the country, narrowly missing out on the semi-finals of the competition. Five members of the squad attend Exeter Deaf Academy.

The group, who play for Exeter CITY Community Trust’s Under 16s Deaf squad, had progressed through two rounds of the cup to compete at St George’s Park – the home of the FA and the England’s 28 national teams.

The Exeter team is made up of Aiden, James, Matthew, Alex and Tom who study here at the Deaf Academy, along with teammates Ryan, Seb and Jacob. They are coached by learning leader Ashley Parkes who also works here at the Academy.

Ashley said: ‘I would like to say huge thank you to Exeter City Supporters’ Trust, CITY Community Trust and Exeter Deaf Academy in supporting this brilliant experience for the boys. They had a fantastic time at St George’s Park. Before the football tournament started you could see how much this meant to them – this once-in-a-lifetime opportunity of being at the grounds where the England National teams train made us feel like professionals.’

‘Unfortunately, the team did not achieve the winners’ medals, but in my eyes they are winners. They did amazingly well to reach this far in the tournament and gave 110% effort in the extreme windy and rainy conditions – what more can a coach ask for?’

Team captain Aiden said: ‘My experience of the trip was an amazing day and a load of fun times with team mates, parents and our coach as well. St George’s Park hotel had such a beautiful view, and was posh!

‘On the big day everyone was nervous and excited at the same time. Our boys tried their best and managed a few goals in each match. Next year we will get stronger and will be back to get our victory.’

Will Allan, CITY Community Trust’s disability officer, who travelled with the group, said: ‘We are very grateful to both Exeter Deaf Academy and Exeter City Supporters’ Trust. Both organisations made donations which paid for travel and accommodation, so the group could travel up to the event the night before and stay at the venue.’

The FA People’s Cup is the country’s largest and most inclusive small-sided competition. It welcomes male, female and disability players across 15 categories – ranging from 11+ through to veterans (over 35s). This year’s competition saw over 4,000 teams compete at 240+ venues around the country as the first round kicked-off in February.

Will added: ‘It was a fantastic day and an amazing opportunity for this group of young players to experience playing at St Georges Park, the home of England’s national football teams.’