Exeter Deaf Academy to Feature on Exeter Monopoly Board 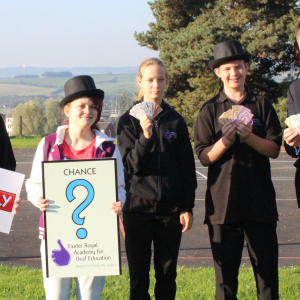 Monopoly bosses said Exeter Deaf Academy ran the “most imaginative campaign” to secure a place on the board, which included eye-catching You Tube videos.

CEO and Principal Jonathan Farnhill said, “As one of the city’s oldest charities, we are thrilled that the Deaf Academy will feature on Exeter’s new Monopoly board. It’s fantastic that the community got behind our campaign and we’re delighted to be included in this exciting chapter of Exeter’s history.”

Dan Taylor, Head of Custom Games at Winning Moves UK, who are making the board under official license from Monopoly owners Hasbro, adds: “We were nicely overwhelmed with great responses. Thank you to everyone who sent in nominations. Congratulations.”

On 14th October Jonathan Farnhill will attend the Monopoly: Exeter Edition launch where a gigantic replica of the board will be unveiled in the city centre at exactly the same time as the game hits shop and online shelves.

The brand new MONOPOLY: Exeter Edition board will be available at all good toy and book stores from 14th October, including at Waterstones, WH Smith and The Works. The board will also be widely available online, including amazon.co.uk

22 Exeter property landmarks will feature on the new board which is out just in time for Christmas.