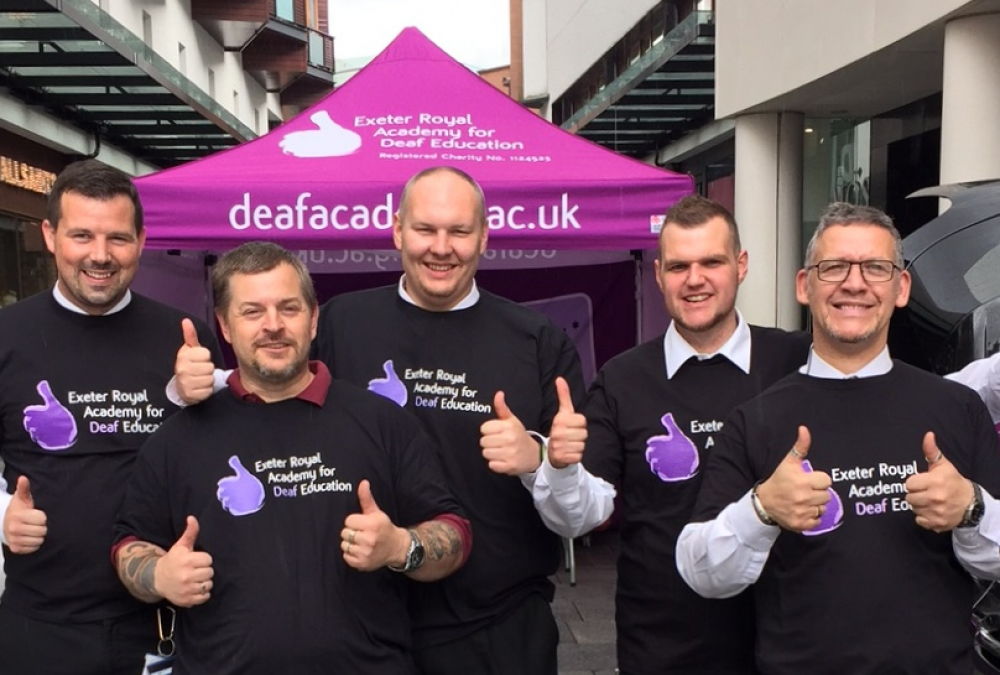 On Saturday 3 September, a dedicated team of 11 staff from Princesshay shopping centre in Exeter will be competing in the tough ‘City to Sea’ marathon and ultramarathon to raise money for us.

City to Sea is a challenging 26.58 mile run or walk starting from Exeter’s historic quayside. The event, organised by Torbay Holiday Helpers Network, is an undulating route across rolling Devon countryside with the added challenge of timed checkpoints. It follows riverside paths, country lanes, woodland tracks and cliff top climbs finishing at Babbacombe Downs in Torquay.

Each year, Princesshay shopping centre officially supports a different local charity by helping to raise awareness through fundraising and supporting events. We are their ‘2016 Charity of the Year’ and the Princesshay City to Sea team have pledged to raise £4,000 by completing the challenge.

Eleven of Princesshay’s security and cleaning staff are in the team. Ten will be taking part in the marathon, with David Purse, Princesshay’s Security and Cleaning Manager, tackling the ultramarathon. Both parts of this event are extremely tough, with strict time limits.

Princesshay Security Supervisor, Jordan Acreman is competing in the marathon alongside his brother Craig and they both have a strong connection to our work. Craig, is a former pupil and now works as a Specialist Care Officer, supporting the next generation of Deaf pupils on their journey to fulfil their own potential.

Jordan said, “My brother Craig is the motivation for me taking part in this 26.58 mile challenge. My workmates know what this charity means to me, so they are more than happy to commit to helping us fundraise the £4,000 target. I’ll also have Craig in the race with me and both our families will be cheering us on the day. I can’t wait to cross that finish line in Babbacombe.”

In preparation, the Princesshay team have been dieting and training hard to get their fitness up.

Princesshay Security Officer and Trainee Beekeeper, Jordan Doulin said, “A few of us in the Princesshay team have lost loads of weight in training. I have lost two stone, which has motivated me even more to complete this ambitious challenge. The team have been training for months now and even though it means putting our bodies under stress, it’s all worth it for such a great cause”.

He continued, “Whether supporters cheer us on the day or sponsor us with a donation, having people’s support means everything. Knowing they are behind you, willing us on means you get that extra boost and can achieve your best.”

We are the only specialist day and residential Deaf education provider in the South West with a proud history in the city of supporting students who join us from throughout the UK. We also support Deaf students learning in mainstream education by providing an outreach service. However, we are not funded in the same way as state schools and rely on fundraising such as the City to Sea Ultramarathon to support projects that otherwise would not happen.

Our Community and Corporate Fundraising Manager, Tori Vince, said “We are incredibly grateful to the Princesshay Team for taking on this mammoth challenge – it really is no mean feat and has required huge commitment and preparation from everyone involved. We wish the whole team the best of luck for the event. We hope they take inspiration on the day that their support and fundraising enables us to create vital projects that help Deaf young people to fulfil their potential”.

Princesshay Centre Director, Wayne Pearce comments, ‘We’re very proud of the team and their dedication to training and completing this challenge. The whole of Princesshay is supporting them and we hope people help them reach their fundraising target for our charity of the year, Exeter Deaf Academy.’

To sponsor the team, visit the Princesshay team’s fundraising page at mydonate.bt.com/fundraisers/princesshaysecurity