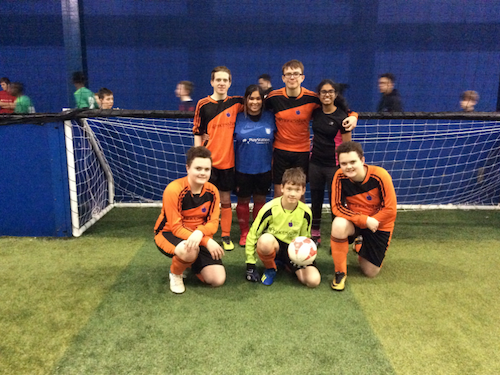 On Tuesday 6 February some of our School students travelled to Derby for the annual Deaf Schools Football Tournament!

Our team had a 6am start followed by a 5.5-hour drive to Derby. The traffic and weather was kind to us and the students enjoyed chatting and playing on their phones during the journey. The Academy had one team in the boy’s football tournament this year: Mathew, Tom, Oliver, Jay and Milan.

“On arriving the organisers kindly agreed to our boys mixed age team playing up in the senior’s tournament. For Oliver, Jay and Milan this meant they would be playing against Year 10s and 11s. This was their first Derby Football tournament they took it within their stride and stood up to the challenge!

They all played well as a team, the competition in the seniors was strong but they never gave up just kept working hard and playing for every ball.”

The team played well, but were knocked out conceding a goal with the last kick of that game.

Two of our girls also attended this year; MK and Nissi, with this year being MK’s first ever tournament. The organisers arranged for them to join other girls’ teams that were short of players.

“Nissi joined the Royal School Deaf Derby (RSDD) but as the senior team had 5 players Nissi had to play with the Junior team. She was a little disappointed with this at the start but really shone through as a role model for the younger girls and brought some great maturity to the team, stepping confidently into the captain role and playing a forward position.

“MK joined a mixed Senior team with players from Heathlands and Braidwood. After her initial nerves (as this was her first football tournament!) she stepped up and really gave her all. She not only played well but also gathered the team together for some inspirational team chats and organised players in their chosen positions, while playing a forward position herself.

“The football tournament is a great place to enjoy sports and support each other through the highs and lows, grow in confidence and develop team skills. It also gives the students time to make new friends or catch up with old friends.”