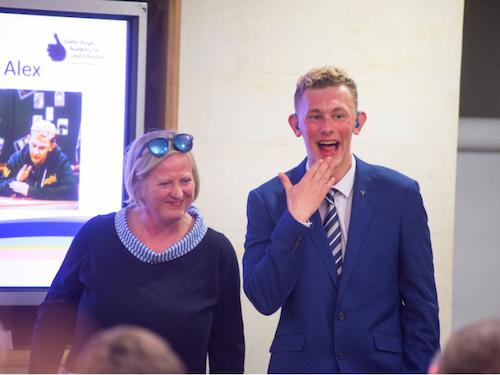 A milestone event in the 194 year history of our Academy took place at Bicton Arena on 28 March
The event, hosted by The Hon. Charles Fane Trefusis, son of Lord Clinton, marked twelve months until the Academy’s new campus opens on the former Rolle College site in Exmouth.

Guests had the opportunity to learn more about the new word class Academy and our plans to create Britain’s first Deaf-friendly town in Exmouth. They also heard from our Trustee Jenny Sealey MBE, artistic director of the Graeae Theatre Company. She spoke passionately about her experiences of growing up as a Deaf child. She explained the isolation so many Deaf children face in education and the many lives which will be transformed at the new Academy.

Jenny went on to interview two Academy students, Alex and Nissi. Both students told their stories to our guests and shared their hopes for the future.

Alex said: ‘Here at the Academy I have built my independence and learned so much. Before I didn’t know what I wanted to do in the future. Now I know that I want to teach football when I’m older.’

The event was also a chance to thank all the charitable trusts, companies, schools and individuals who are generously supporting our fundraising campaign.

With a year to go, we still need to raise £250,000 to fully kit out the new facility. Steve Morton, our Director of Development, was delighted with the new offers of support which have emerged from the evening.

Steve said, ‘We’ve been overwhelmed by the commitment of the people of Devon to changing young Deaf lives. We will be starting a revolution in Deaf education in Exmouth. And it will be the people of Devon who will raise the money to get us over the line.’